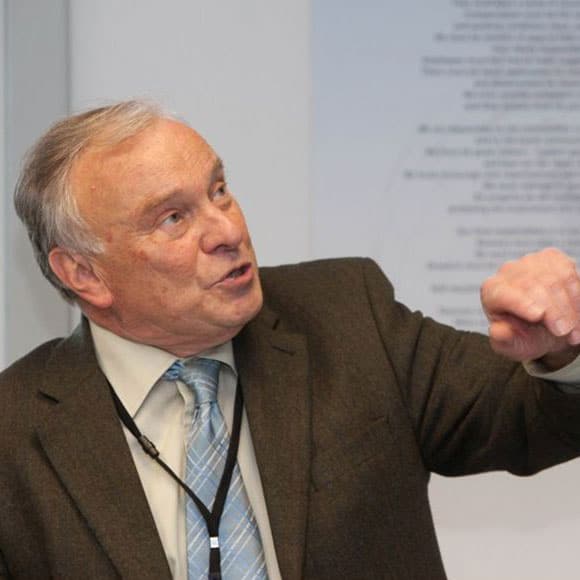 To talk about heat pumps it is essential to start from the beginning, i.e. to discuss heat itself. Today the notion of heat is so commonplace that the term is used in a number of senses without much distinction being made among them. Heat is what fries or boils an egg; heat is what you feel on your skin when sun shines on it; heat is what makes a struck match burst into flame; heat is what turns a barroom conversation into a brawl or what you feel under your collar when someone disparages your car, your clothes or your pet.

Heat, as it will be discussed here is a manifestation of disorganized molecular energy. The more intense the disorganized energy, the higher the temperature rises. The bigger the object endowed with this temperature, the larger the quantity of thermal energy becomes. Speaking in a strictly technical sense, heat is thermal energy in transit from one object to another: Heat is what flows from a hot object to a cooler object.

The History of Heat

In the late 1700s, the development of the steam engine was well underway. The most active development was in Britain where it was first employed to pump water out of mines. This new technology began to displace the earlier sources of pumping energy… mostly water power and literally horsepower… which had previously restricted energy-intensive activities to very limited geographical areas.

This development was pioneered for the most part by imaginative technicians: toolmakers, instrument makers, tinkerers and talented improvisers. The first devices to use the power of steam used its negative pressure, i.e. the partial vacuum produced when steam in a closed vessel is cooled and condensed.   Anyone who has ever cooled down a pressure cooker will have experienced this phenomenon as the strange combination of sucking sounds that occur just before the lid can be removed. The progression to the use of steam at positive pressures quickly produced technical advances. It also gave steam power its growing reputation as a dangerous and unreliable way to produce power as a result of burns, metal fractures and explosions. 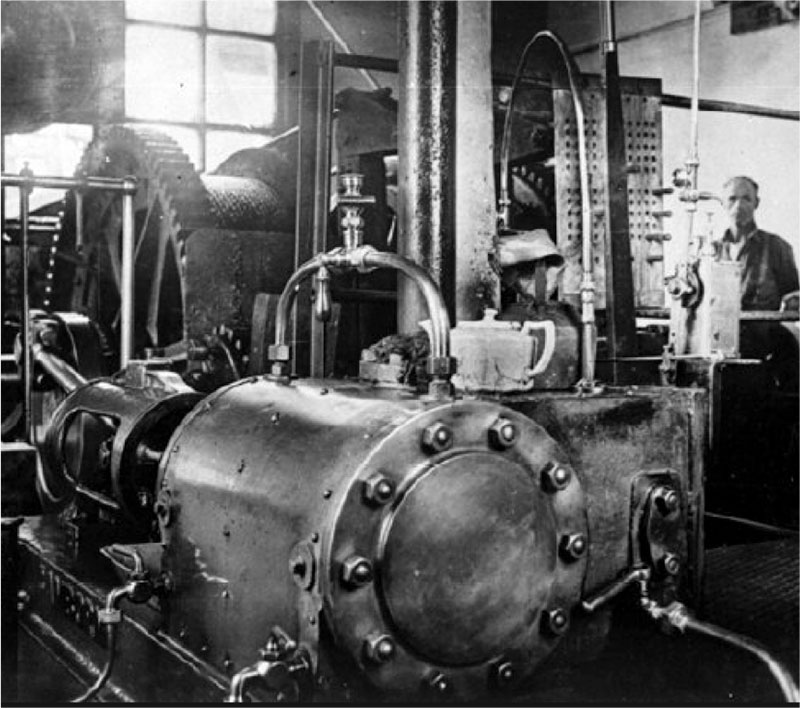 Steam engine at a mine-works

It was in this milieu of frenetic technology development that the young French scientist/engineer Nicolas Leonard Sadi Carnot began his efforts to understand from fundamentals exactly how fire produced power. One of the many difficulties he faced was that there was no real understanding of heat at the time.

Heat was thought to be a manifestation of a weightless fluid called Caloric. What is really remarkable is that Carnot identified the basic influences which limited the efficiency of engines and then reasoned that the most efficient heat engine must be one that is reversible.

Reversible in this context meant that if the machine were supplied with motive power rather than with heat, it would extract heat from one source and supply it to a second source. In other words, a Carnot-reversed engine would become a refrigerator/heat pump. The work was published in 1824 as a book “Reflections on the Motive Power of Fire”.

His work remained little known for almost a half-century until Clausius and Thomson (Lord Kelvin) realized its importance and made use of it to formally establish the basic laws of thermodynamics. 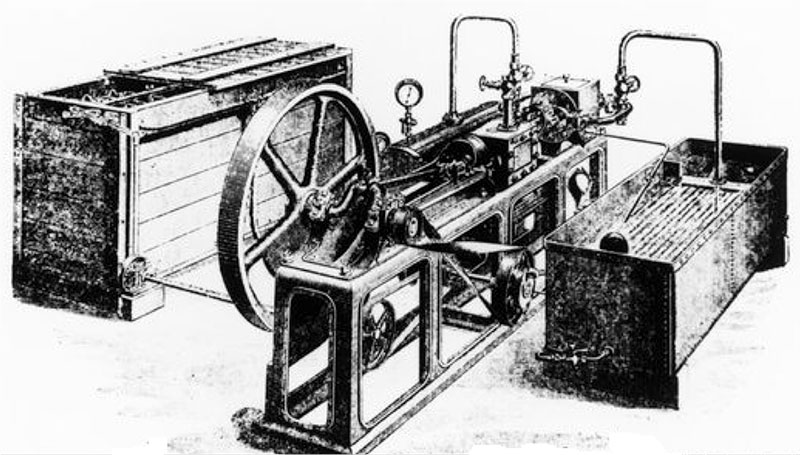 Ice Making Machine circa 1875
In this new science, the concept of caloric was replaced by entropy, a commodity now familiar to anyone working in thermal science or engineering. Carnot’s insights are seen today as the foundation of thermodynamics, the science of the interplay between heat and mechanical energy. 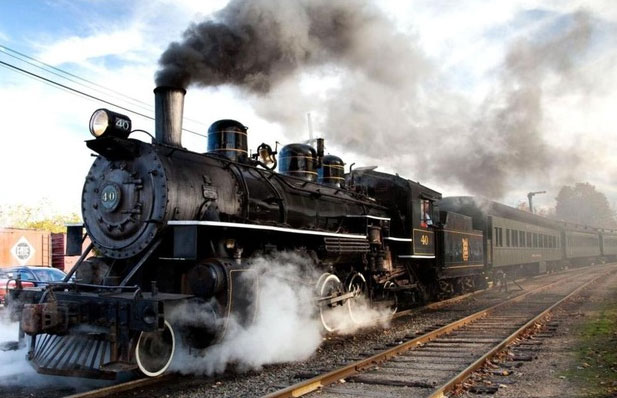 Steam Railway Locomotive
The two types of heat machine became the seedbeds for two very distinct technologies: The heat engine went on to become the centrepiece of the industrial revolution: the Prime Mover as it was bombastically known. Everyone has experienced the magic of steam power, most often in the mechanical poetry of the steam railway locomotive… hissing, snorting, menacing… the iron horse was a well-chosen name indeed.

The Carnot reversed engine became the foundation stone of the refrigeration industry and in later years the air conditioning industry. The “other half” of the heating-cooling machine, the heat pump, was to remain a technology largely without an application for many decades. There were exceptions to this generalization of course. The ability of a mechanically driven machine to produce useful heat was recognized very early. One of the candidates put forward for designation as the inventor of the heat pump is Peter Ritter von Rittinger, a prolific Austrian inventor who worked in the mining industry. His use of the heat pump was to supply the heat needed to extract salt from brines. This event is dated to 1856, very early in the development of mechanical heating and cooling.

Early technology enthusiasts in many places used heat pump technology to heat houses as early as the 1920’s. However, heat was so much easier and cheaper to produce from coal, oil, wood or early types of town gas that “pumped heat” remained largely a laboratory curiosity for many years. The change in this outlook began with the disaffection for the postwar consumer-centred culture expressed in the hippy movement of the late 1950’s, the “Free Speech Movement” of the early 1960’s and other elaborations. This era saw establishment researchers being lectured by counterculture gurus on the merits of indigenous and eco-architecture…building with adobe blocks, with bent poles and animal skins, with waste materials such as glass bottles… and many other departures from standard practice. Praise was also heaped upon other exotic departures from the commonplace: solar panels, wind turbines, recycling and using heat pumps for warming buildings.

This might all have run the natural course of many other fads had no other world events provided their own impetus. In 1973, the OAPEC group of oil exporting countries imposed an embargo on countries which had supported Israel in the Yom Kippur war. When the embargo ended after some 6 months the result was a 400% increase in the price of oil. This was followed in 1979 by another supply interruption and a further 100% increase in the price of oil as well as financial crises. After these strong signals, many more people were willing to look seriously into anything that could make normal living less dependent on oil.

The price of oil nominal and in 2015 dollars
Let’s remind ourselves again of just what the heat pump of 1980 could offer. The best-known embodiment of the heat pump was the window-mounted air conditioner used widely in the southern states of the USA. 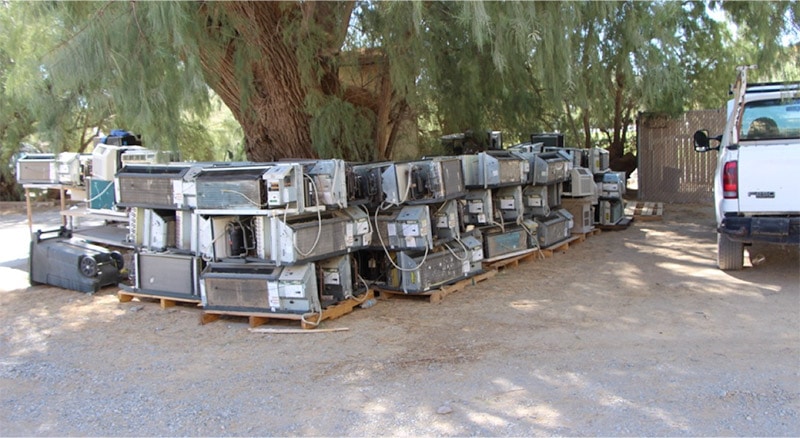 Old Air Conditioning Machines
Some of these “window shakers” as they were known, were reversible i.e. they could either heat or cool the air inside the house as desired. They were not very efficient at heating and they would barely work at all when the outside temperature went anywhere near freezing, but practically all of them could produce a good bit more heat than the electrical energy they consumed. The widespread worry about oil scarcity was enough of a stimulus to the AC unit makers to add “Heat Pump” to their unit designations, whether there was any real engineering behind the claims or not.
The Carnot performance limit to heat pump efficiency was astounding to anyone hearing it for the first time. One unit of motive energy (usually electricity) fed to a heat pump could theoretically upgrade heat from a source at 0°C and supply it to a load at 50°C with an efficiency of almost 650%! At the same time, a really good oil boiler might have an efficiency of 75% with an absolute limit of 100%. The temptation of such potential was far more than many marketing departments could resist and a Wild West era of heat pump heating was all but inevitable. 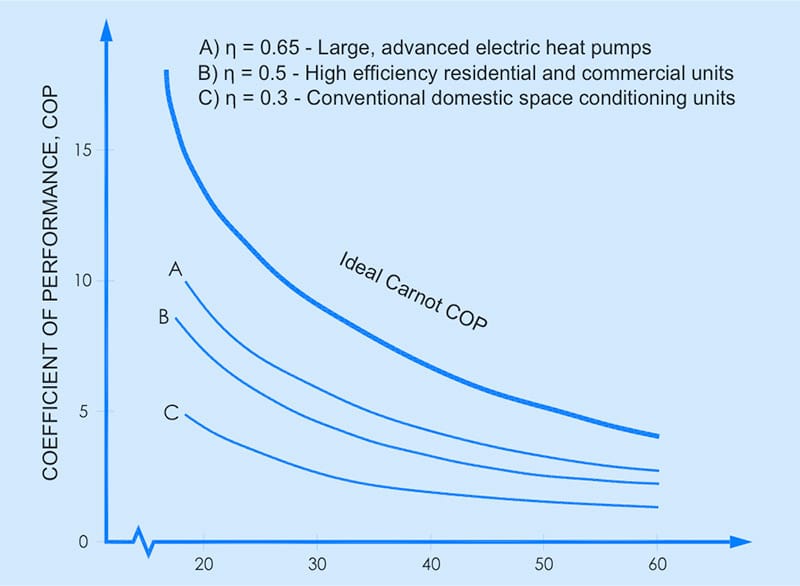 Today the know-how of the heat pump has evolved to a point where there are products available for all dwelling sizes from small flats to sprawling mansions in leafy demesnes. They come in versions using a bewildering variety of heat sources: outside (ambient) air, exhaust air, groundwater, stream flow, lake and even seawater, earth and even some using solar heat. The range of sizes runs from a few hundreds of thermal watts up to more than 10 megawatts… a range extending from the domestic refrigerator up to behemoths providing heat to entire towns.

The application range has spread very far and wide. Heating and cooling and humidity control of buildings is probably the biggest single sector. Drying is another big field. Anything from pharmaceuticals to food, in quantities from grams to tonnes, the separation of water from a product is another logical place to deploy this marvellously efficient technology. Think of commercial laundries, of grain in storage silos of thousands of tonnes, of industrial kilns for wood drying, paint drying… the list is endless.

The Future of Heat Pumps 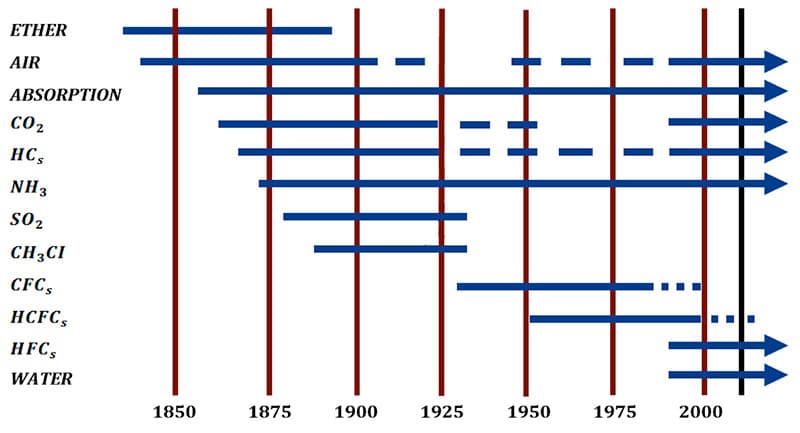 Timeline for Refrigeration Working Fluids
Heat pump technology faces a number of ongoing challenges looking toward the future. The first is the environmental impact of refrigerant fluids. Early heat pumps were made using any substance with a boiling point well below that of water. Many of these early refrigerants were corrosive, noxious, narcotic, poisonous, flammable, or had several of these undesirable attributes. The answer to these difficulties appeared to come from technology in the 1930’s in the form of the freons: chemically stable, odourless and nonflammable gases.

These engineered chemicals had forced almost all of the earlier refrigerants out of the market by the 1970’s. Then came the discovery of atmospheric ozone depletion and the identification of the chlorinated fluorocarbons (CFC’s) as the primary villains. The saga is ongoing.

The CFC’s have been banned from production for more than a decade, but many of their successors have come in for criticism for their high global warming potential (GWP). The current scene is a confused one in which there are new and expensive engineered fluids on offer alongside some of the resurrected old fluids: hydrocarbons, ammonia, carbon dioxide, air and water itself. 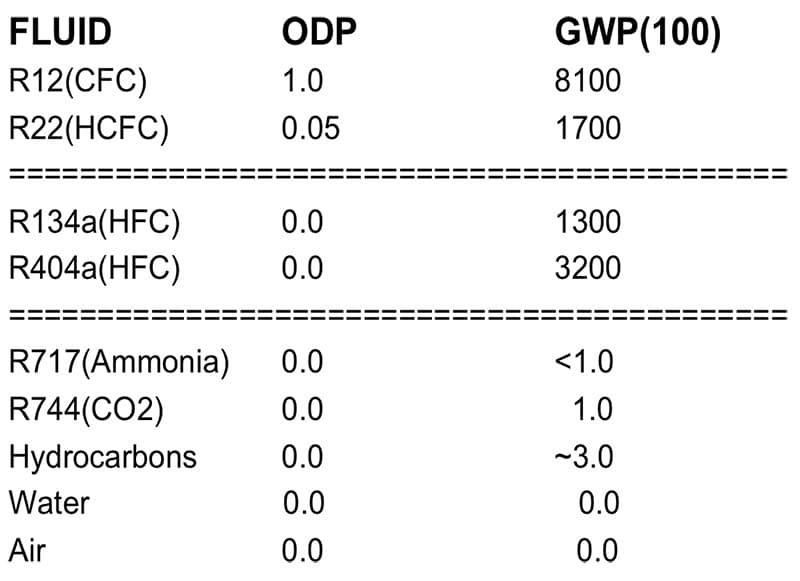 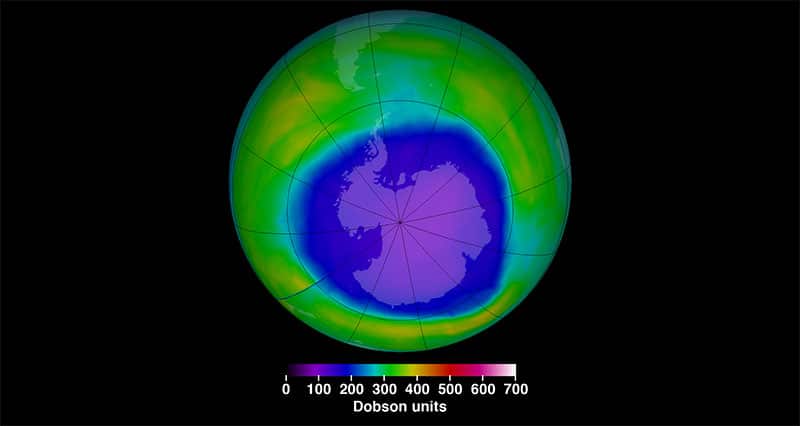 The Hole in the Ozone Layer

The other frontier is that of temperature, or more precisely the heating-side reservoir temperature. Today it is possible to buy heat pumps capable of supplying heat up to about 110°C. Existing technology is capable of extending this limit up to about 130°C, but no single market niche requiring this capability has been identified to date. The other dampening factor is that the theoretical efficiency of the heat pump process decreases as the hot-side temperature rises.

To read more on this topic, check out this article on environmentally-friendly CO2 heat pumps.

Sirus deliver and maintain compliant, comfortable workspaces and energy efficient buildings in partnership with our customers, other service providers and suppliers. We have a global customer base spanning all industries. Below are the top industries we service.
Pharmaceutical
Healthcare
Data Centres
Retail
Commercial
Education

Let’s talk about your project!